Charles Ryder: A Life in the Arts

I am a freelance designer specialising in print and website design for artists, musicians and arts organisations. My professional background is in museums, galleries and universities.

I have designed fine and decorative art exhibitions for the Metropolitan Museum of Art, the Guggenheim Collection and the Frick Collection in New York, and the Museum of Islamic Art of the Kuwait National Museum.

My museum and gallery work in the UK includes exhibitions for English Heritage, the National Museums & Galleries on Merseyside, and the National Trust.

I was born in New York in 1947 and grew up in northern New Jersey. My father, an orthopedic surgeon, came from the Rocky Mountains, my mother, a nurse, from the shores of Lake Erie in western New York State. We loved books and music in our house. My parents gave legendary parties.

Earliest memories: our house in the converted WWII barracks at Shanks Village, Rockland County, New York; my best friend Bronwen Sennish who lived across the street; learning to read the New York Times; the birth of my wonderful twin sisters Julie and Tripp.

To escape the stifling atmosphere of the suburbs I adventured to my ancestral home in Colorado, attending Fountain Valley School, a progressive boarding school set on the rolling prairie near Colorado Springs. An Honor Role student, I was Proctor in my final year, edited the school newspaper and was captain of the Track (Athletics) team.

For a good couple of years John Perry Barlow was my best friend at Fountain Valley. I spent a summer at John’s Bar Cross Ranch in Wyoming and we did a couple of cross-country road trips together. A teenage love triangle sent the friendship tumbling into the long grass but it somehow survived the test of time. His 60th birthday celebration in New York was memorable, especially the pineapple slices at dawn.

Postscript
I made these pages in ancient html to celebrate the  2010 reunion of my graduating class.

I returned to the East Coast for my undergraduate degree at Middlebury College in Vermont, studying psychology, and later fine art, graduating with High Honours in 1970. I was greatly influenced by the teaching and the work of painter and printmaker Professor Bruce Muirhead.

Crimson flames tied through my ears, rollin’ high and mighty traps
Pounced with fire on flaming roads using ideas as my maps
“We’ll meet on edges, soon, ” said I, proud ‘neath heated brow
Ah, but I was so much older then, I’m younger than that now”
— Bob Dylan, My Back Pages

We were hippies then, thinking ourselves quite on the edges. Long hair, silly moustaches, motorcycles, protest, drugs. Adrienne came to live with me. We made art and poetry and got married on Woodstock weekend. A year later we lost each other in the turbulence.

I moved to New York to attend Columbia University Graduate School of Architecture and Planning. My first flat was at 120 Claremont Avenue, just behind Grant’s Tomb on Riverside Drive. I stayed at my friend David Marino’s apartment on West 110th Street the following summer, working nights at a discount gas station. The next flat was a charming studio on West 107th Street, then I settled down for a while in a partially renovated brownstone on West 85th Street. During most of this time I was close to Cynthia Rock, a Columbia classmate who became a very good architect and eventually projects manager at the New York Public Library.

With Robert Stern I had a big fight during a crit, sufficiently unnerving that I took a leave of absence soon thereafter, to work in architectural practices the better to understand what the hell was actually going on.

My professional career got underway with a series of freelance jobs building architectural scale models, notably for Davis Brody Bond, where I learned much about the practice of urban architecture. At Davis Brody I worked with Gary Jacquemin, lead designer for the US Pavilion at the 1970 World Exposition (EXPO ‘70) in Osaka, Japan.

Returning to Columbia a year later, Kenneth Frampton wisely read my temperament and suggested that I read some philosophy. Professor Giurgola taught me that as an architect, “You try many things; usually you discover that the first idea is the best one.”

I published a samizdat newsletter and produced the Dark Side of the Moon lecture series, an early precursor to my work on transitstation. Speakers included Julie Marino (née Dubro), Steve Bass, Gary Jacquemin and Minoru Yoshida (see below), Cynthia Rock, David Marino, and Rem Koolhaas and Elia Zenghelis. The Koolhaas/Zenghelis lecture was the first public presentation in America of the ideas that would be published three years later as Delirious New York.

Another achievement at Columbia was to commandeer the student entertainment budget for an entire semester to create “A Very Pure Party”. The studios were awash with drink and I barely escaped expulsion. But we danced, we danced!

Graduating from Columbia in 1975, I joined Gary Jacquemin  at Concept: International Visionaries, an independent design consultancy based in a former textile loft at Bleeker and La Guardia Streets in Greenwich Village. I worked with Jacquemin and his colleague Minoru Yoshida on a number of architectural and artistic projects, happy to partake of the rational/ecstatic avant gardism practiced at Concept.

I began my career in museums and galleries at the Metropolitan Museum of Art in New York starting as a freelance working on early design studies for the Michael C. Rockefeller Wing (currently undergoing renovation), then as staff designer working on exhibitions, permanent installations and master plans. I was an assistant designer for the New York installation of Treasures of Tutankhamun, and designed 5,000 Years of Korean Art and Renaissance of Islam: Art of the Mamluks.

I went on to design and manage museum projects in the United States, Great Britain, Europe and the Middle East. These commissions included Silver in American Life and reinstallation of the Garvan Collection for Yale University Art Gallery; Innovative Furniture in America for the Smithsonian Institution; master plan and design for the al-Sabah Collection of Islamic Art at the Kuwait National Museum; Voices of Hellenism for the Benaki Museum (Athens) and the Smithsonian Institution. 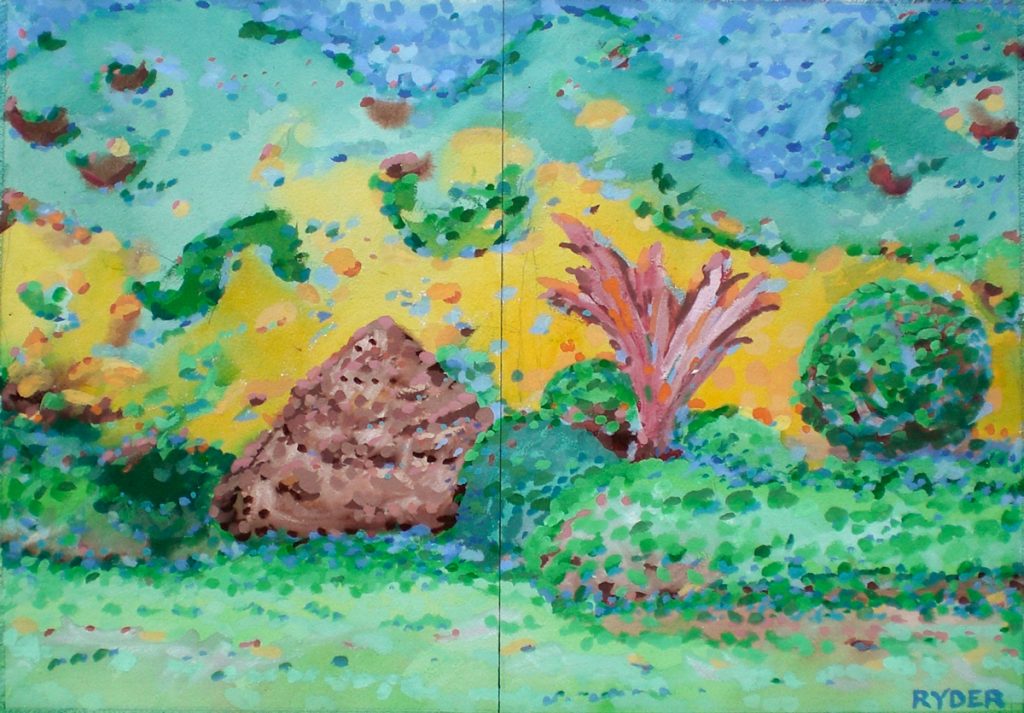 I left the Met to design the Museum of Islamic Art of the Kuwait National Museum for Sheikh Nasser al-Sabah al-Ahmed al-Sabah. The project team of 75 museum professionals led by Dr. Marilyn Jenkins-Madina created a new permanent installation of Sheikh Nasser’s collection in record time, building the exhibition, and cataloguing, conserving and installing 750 objects in 10 months from the start to the opening in February 1983. A second phase was completed in 1985. The installations were destroyed in the final days of the first Gulf War, though most of the collection was safe in Iraq, having been seized and taken to Baghdad soon after the invasion of Kuwait.

I was able to fulfil my lifelong ambition to live in Europe by virtue of the international travel and professional contacts deriving from the Kuwait project. I settled in Brixton, London in 1989, working as an associate at museum designers Jasper Jacob & Associates (JJA) and doing freelance work for Plowden & Smith, London’s leading art restoration, conservation and installation service.

At JJA I headed up the design team for Riyadh Yesterday and Today: The Saudi Experience, an immense and distnctly non-museological cultural exhibition staged by the Municipality of Riyadh at Olympia, London, and the Grand Palais, Paris.

In 1990 I was awarded a Sargent Fellowship by The British School at Rome for the study of sculpture display in the Vatican and Capitolino Museums. During the four-month residency I toured Yugoslavia (as was) at the behest of the United States Information Service, lecturing and advising in national and municipal museums from one end of the country to another.

Independent commissions included the gallery of European Sculpture 1750-1920 at the Walker Art Gallery, Liverpool, the History Room at the Iveagh Bequest Kenwood for English Heritage, A Picasso Bestiary for the London Borough of Croydon, and Virtue and Vision: Sculpture and Scotland 1540-1990 for the National Galleries of Scotland, Edinburgh. In the run-up to the Millenium, I was a consultant to Zaha Hadid Architects, as a member of the team developing the Millennium Dome Mind Pavilion.

From 1999-2004 I served as Curator, Stanley Picker Gallery, Kingston University London, with responsibility for managing the exhibition programme and related events. The post entailed long-range planning, marketing, financial administration and production of catalogues.

In 2003 I established the Kingston Contemporary Open Art Exhibition as a joint project of Kingston University, the Kingston Museum and the Penny School Gallery. Notable exhibitions included one-person shows for Martin Pace, Chris Jennings, Simon Klein, Charlotte Moore, and Dagmar Glausnitzer-Smith, and 5 x 20, a survey of abstract painting. I worked closely with Armando Alemdar and André Durand to help launch their Neomodernist Manifesto, a Platonic approach to art for the 21st century.

My biggest project at Kingston was 70/2000: The Road to Meikle Seggie, a huge exhibition honouring the legendary arts entrepreneur Richard Demarco on his 70th birthday.

While at Kingston I undertook a number of independent assignments, including preparation of a master plan for post-war reinstallation of the National Museum of Lebanon’s sculpture collection.

When the job at Kingston came to an end, I returned to freelance practice, designing websites and exhibition catalogues, teaching, and curating transitstation a touring international live art “exhibition as event”, devised at the Picker Gallery in 2003 by Dagmar Glausnitzer-Smith. transitstation events unfolded in London, Berlin, and Edinburgh, and Copenhagen, featuring curated performance pieces by 60 international artists.

I served for a time as Curator for Art & Culture at Diamond Light Source, the UK’s biggest science project in 60 years. I assisted the artist in residence scheme, devising a programme of artistic and cultural events, and developing funding strategies and long-term partnerships in the arts and sciences.

Over the last several years I have focussed on design for print, the internet and media. Print work includes books, posters, programmes and invitations; I am responsible for design and site management for a dozen websites, mostly featuring the  work of artists and musicians, and have made a number of short promotional films for live art events and music venues.

In late 2008 a providential bequest made possible the purchase of a small cottage in Yport, Haute Normandie. I have commuted between the England and France for almost 14 years now. When in England I continue with my freelance design practice. In France I paint and draw and visit the sea and the forests.

The cottage is blessed with a splendid little garden, located across the lane, with a rustic garden shed, decrepit when I bought the house, but subsequently renovated as studio, guest quarters, and even an airbnb rental which enjoyed great success for a couple of years.

During the early and middle Yport years my daughters were in secondary and higher education and visiting several times a year. Here is a favourite informal portrait photo taken by Micha Bohac in December 2013. I am wearing the coat that Micha gave me. 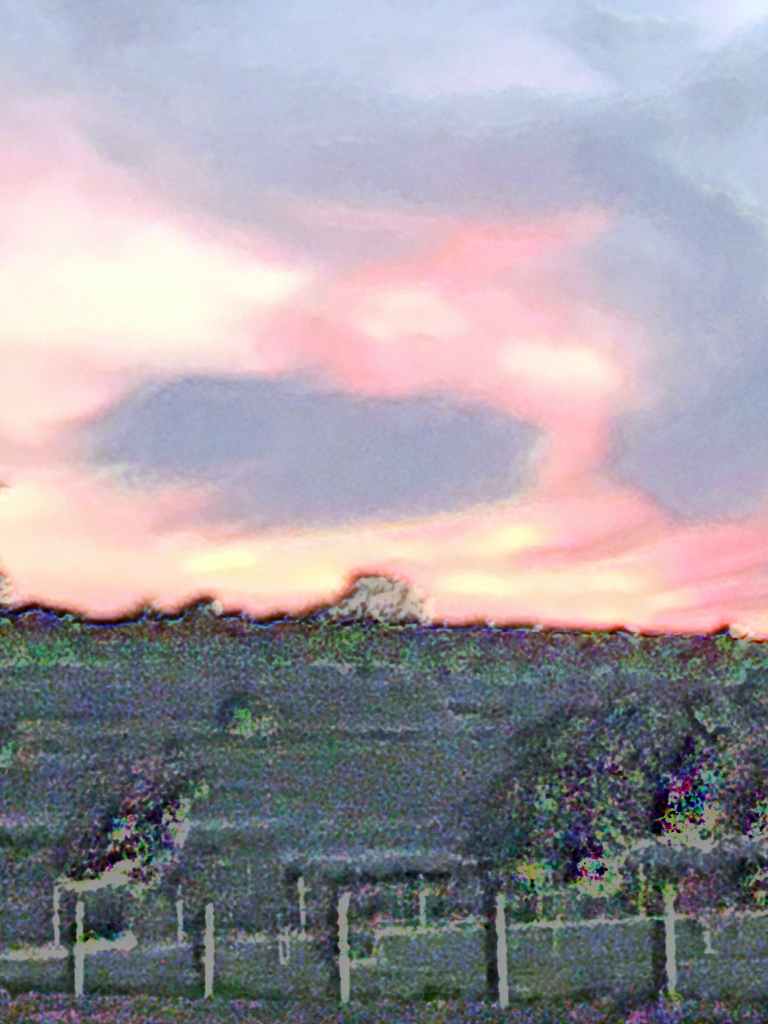 Semi-retired and living with friends in West Berkshire. Back and forth to Yport as conditions permit. I’m delighted to maintaining and updating websites for clients who have been with me for ages, including piano tuner Tim Hendy, composer Paul Reeves, artist and musician Simon Klein and designer and artist Calum Storrie. Keeping an eye on Hair! Human Stories for anthologist Emma Tarlo pending future developments post-covid, and branching out into WordPress sites, including Amphibology, RyderDesign and a template site for the artist and gallerist Kate Proudman. 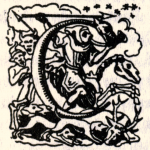 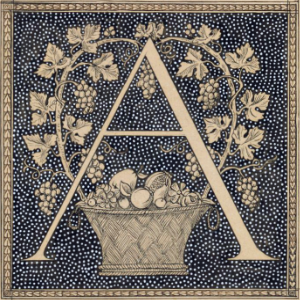 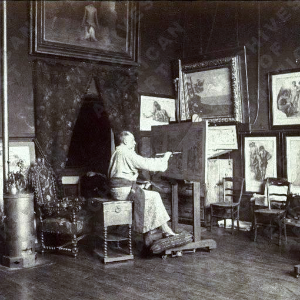 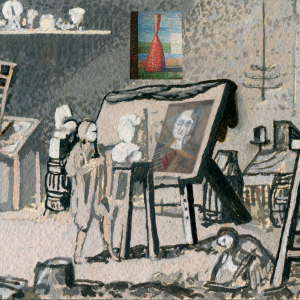 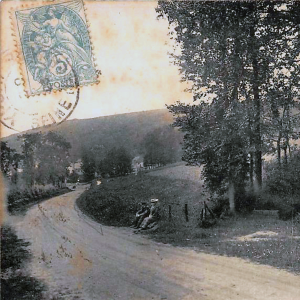